Proving a Small Business Can Be a Leader in Green Leasing

Based in Northeastern Ohio, NEO Realty Group is a vertically-integrated real estate company that manages or owns properties in four counties in the Cleveland metropolitan area and is one of eleven companies to be named a 2015 Green Lease Leader—a designation created by IMT and the U.S. Department of Energy’s Better Buildings Alliance.

One of the buildings it manages is a 5,500- square-foot retail store, which is occupied by an American Cancer Society (ACS) Discovery Shop.  At the time of ACS’s lease renewal in 2013, the organization, which paid its utilities directly to the utility provider, desired to lower its rising energy and water costs, balance potential rental increases, and minimize cash outlays. ACS reasoned that by controlling these expenses, it could increase employee comfort and redirect crucial funds to its mission of supporting those living with cancer.

The building owner realized that meeting the nonprofit’s requirements posed a significant hurdle to a future lease renewal under the owner’s desired rental rates. To overcome these split-incentive barriers, NEO Realty Group aligned the owner and ACS’s goals in an energy-aligned lease mid-cycle. As a result of negotiations, NEO Realty Group agreed to cover all of the Discovery Shop’s upgrade costs with an expected return on investment of 15 percent at the end term of the lease, in addition to an overall reduction in energy expenses. As a result of upgrades the Discovery Shop reduced its lighting load by 70 percent, and the store’s repair expenses will be reduced due to the new longer-lasting equipment. This green lease transaction demonstrates that anyone in any location can achieve energy efficiency goals for both landlord and tenant stakeholders. 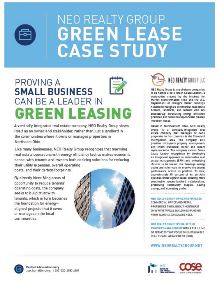