Taking a look back at 2013—which was a banner year for IMT with significant developments in each of our program areas—IMT released its first Annual Report. The report highlights key achievements in 2013.

We are encouraged that 10 billion square feet of space are now affected by building energy benchmarking policies nationwide—a number that is sure to grow following the launch of the City Energy Project in 10 major U.S. cities in conjunction with the Natural Resources Defense Council. The amount of research and data that showcases the financial benefits of energy-efficient buildings continued to grow in 2013, and included our finding that energy-efficient homes are 32 percent less likely to go into default than comparable, less efficient homes. Throughout the year, we advocated for practices to unleash the economic savings offered by energy building codes, and we engaged with more building owners, brokers, and tenants than ever before on energy-aligned leasing. 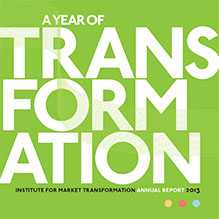