Worldwide, commercial building energy benchmarking and disclosure mandates are becoming more common as policymakers target the building sector in energy and climate protection policies. As such, policymakers are becoming more attuned to building energy performance mandates. These mandates are primarily aimed at existing buildings, which comprise the vast majority of the building stock and present the largest opportunity for reductions in energy and greenhouse gas emissions.

In the past few years, some states and cities have enacted policies requiring performance rating and disclosure for privately owned commercial buildings. With additional policy activities underway in more than a half-dozen jurisdictions, a proliferation of such policies appears likely over the next several years. In the absence of federal policy, states and cities have tailored policies according to local needs and political considerations. This has resulted both in policy innovation and widely varying requirements between jurisdictions. To date, all U.S. policies leverage ENERGY STAR® software to generate ratings based on building operational data.

To keep real estate professionals informed, CBRE and IMT have partnered to develop the following summary guide that provides a brief overview of the regulatory mandates in each jurisdiction. This is the current version (as of August 2015) of a guide originally published in 2011 and updated twice in 2013. 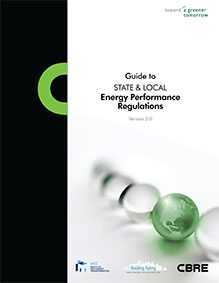