The District of Columbia’s Department of Consumer and Regulatory Affairs (DCRA) recently achieved a milestone no other building department has. In 2016, the department completed the second of two assessments evaluating its effectiveness at enforcing the District’s Energy Conservation Code. The findings presented a significant accomplishment:  DCRA improved its compliance rate with the energy code from 74 percent to 99 percent in just two years.

DCRA is the first local building department to complete both the initial and follow-up assessments based on The City Energy Project Assessment Methodology for Energy Code Compliance in Medium to Large Cities. The methodology was developed by my company, the Institute for Market Transformation (IMT), as part of the City Energy Project, a groundbreaking national initiative between IMT and the Natural Resources Defense Council, to improve the energy efficiency of buildings in 20 major American cities. The methodology recommends cities do an initial assessment to determine a benchmark compliance rate, institute recommended improvements, and then conduct a follow-up assessment approximately two years later.

The importance of the compliance assessment can’t be overstated: a building department needs to know where they’re starting from in order to know if they’re improving. Similar studies conducted by IMT in other cities found an average compliance rate of 69 percent across six assessments. That average is in line with the District’s findings, which makes it likely that other cities will have a similar starting point. There was one common thread among all the cities that had assessments conducted—lack of documentation. Specifically, building projects lacked the proper identification of energy code-required elements on their plans and specifications. This lack of documentation doesn’t necessarily mean a building is non-compliant, but that compliance cannot be determined based on documentation submitted with the permit. Other common areas of non-compliance identified during field inspections and plan review included no labels on site-built windows, improper lighting controls and no mechanical system load calculations.

DCRA staff instituted many recommendations from the initial assessment, as well as some of their own improvement strategies in order to achieve such a significant improvement in a short timeframe. Key to success was supportive leadership and the formation of DCRA’s Green Building Division. Having supportive leadership from the mayor down to the chief building official is critical to instituting any improvement program. In the case of DCRA, it was also the laser focus and determination of the newly created Green Building Division that enabled such progress.

Established in 2013, the Green Building Division is funded by a small fee added to each building permit. The Division’s primary role is to conduct plan review, inspection and certificate of occupancy review for the District of Columbia Energy Conservation Code, DC Green Construction Code, and the DC Green Building Act. In addition, the Division provides industry training and education, as well as quality assurance oversight of approved third-party agencies.

DCRA’s Green Building Division efforts clearly lead to swift change. Although the Green Building Division may not be a replicable effort in all cities that should not inhibit local building departments from implementing best practice improvement efforts. Ideally, the first step would include an initial compliance assessment to identify strategic areas for change, but there are many actions that can improve compliance in the absence of an assessment. IMT has laid out the process as well as common challenges and recommended strategies for improving compliance in its publication: Establishing a Plan to Achieve Energy Code Compliance in Cities. 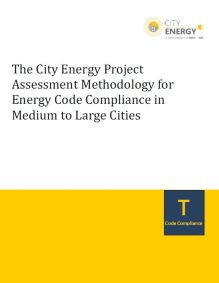 The City Energy Project methodology is designed to assist medium to large cities in identifying residential and...