Salt Lake City wants to be climate positive by 2040. To reach this, the city is committed to reducing its community greenhouse gas emissions by 50% from a 2009 baseline by 2030 and 80% by 2040. To do this, they will need to address building energy use.

Through the City Energy Project, a joint initiative of IMT and the Natural Resources Defense Council, Salt Lake City has spent the last 5+ years working on policies and programs to boost energy efficiency in buildings. What did it take to drive this work? Meet Wendy Lee, the City Energy Project Advisor for Salt Lake City. A California native, she studied Mechanical Engineering at Brigham Young University before working as an energy efficiency engineer. She holds a Masters Degree of Engineering in Clean Energy from the University of British Columbia. She is now a senior energy consultant at NRDC, working on the American Cities Climate Challenge.

What drew you to work in efficiency and sustainability?

I want to help people. I used to work with Engineering Without Borders because I was drawn to the social impact engineering can have on communities. In my role as a city advisor for Salt Lake City with the City Energy Project, I got to see the social benefits that energy efficiency and pollution reduction actions have on the community.

How has your background in engineering helped you as Salt Lake City’s City Energy Project Advisor?

In engineering, we learn structured problem solving. That kind of logical approach was very helpful in achieving the aims of the City Energy Project. I also found that my experience in the audit and retrocommissioning field gave me extra credibility when speaking with business owners.

What advice would you have for someone starting out in a position like yours?

If you lack a background in policy or commercial real estate, seek out an ally with experience in those fields. Learning how to implement and pass policy as I was developing it was a whirlwind, and I was very lucky to have colleagues with policy backgrounds that I could rely on for help and advice, as well as the expertise of the IMT and NRDC staff at the City Energy Project.

What were some of the biggest challenges you faced while completing your work as a city advisor?

Working as a city advisor gave me several opportunities for personal and professional development. The first personal challenge was adjusting to the pace of municipal administration. When working with municipal government, things tend to move slower than in the private sector, and that takes patience and getting used to.

One challenging element of working in Utah is that it can be hard to talk about climate change here. To overcome that, we used rhetoric that emphasized sustainability, but even so, it was hard to galvanize urgency around action when one can’t acknowledge climate change as a problem.  There are quite a few companies and organizations working on sustainability, but there needs to be a lot of work to embed these efforts into the culture of Utah as a whole. This makes policy all the more important, as it can be a tool for change and resilience.

What was it like navigating that political and social climate?

We had to focus on the financial savings that result from benchmarking and efficiency measures, especially low- and no-cost measures and utility incentives. The longer, more transformational work that we do focuses on normalizing conversations around efficiency and sustainability in Salt Lake City. Introducing the benchmarking ordinance gave us openings to talk about efficiency, its benefits, and its importance for community health and the economy. It’s been a real privilege to be a part of that movement.

What has been the impact of the City Energy Project in Salt Lake City?

Salt Lake City’s benchmarking ordinance is a stepping stone to more sophisticated energy efficiency measures and policies. Among every population we work with, there will be leaders and laggards, building managers who embrace change and innovation and those who have to be guided by the city. What matters is that we are making steps toward greater sustainability and better policies in Salt Lake City.

The benchmarking ordinance has been a great tool with which to educate the city’s building managers on efficiency. Benchmarking alone doesn’t save energy, it lets a building owner know how much he or she is using. It’s valuable as a first step and the beginning of a broader conversation. Because of the ordinance, there is a conversation in Salt Lake City on energy use and efficiency. People have come to see that recognizing what we use and how we can improve what we have is a great step for our community.

What advice do you have for other cities like Salt Lake City trying to become more sustainable?

Connect everything you do to the city’s larger goals. It was very helpful that our mayor set climate change commitments for the city to meet. City mandates and published goals are great conversation openers for policies such as benchmarking. It is also very important to make sure that your department has a communications person. Our sustainability office and others like ours around the country do a lot of good work, but it’s hard to promote further work if the public doesn’t know about it.

If your city does not have specific climate change goals, it can also be helpful to align your work with economic or growth goals that the city has, as many efficiency measures carry positive effects for the economy such as utility savings and job creation. As a smaller city, it often isn’t as helpful to point at larger cities such as New York or Los Angeles as examples. Of course, sometimes it is necessary, but in the context of a smaller city it is important to tailor the message so that it is relevant to your local context—to emphasize local leadership, local case studies, and to rely on local advocacy groups to demonstrate how benchmarking and sustainability are alive in your community and how they can benefit your city in particular.

Where do you see the future of Salt Lake City’s sustainable development going?

I see the city following a slow and steady road to increased sustainability. The last few years have been a period of explosive growth for Salt Lake City, with large tech companies and startups choosing to establish new offices in our city and large numbers of young people joining our community. These new members of our community are affecting the market by demanding sustainability features in their buildings and are helping to shape the future of our city. The younger generations are pushing for sustainability and getting it because they realize their own power as economic actors and as citizens of Salt Lake City.

What has been the most rewarding experience you’ve had as a city advisor?

The most rewarding part of the process were the meetings we held with community leaders. They were interested in the implementation of the ordinance and value it would have for Salt Lake City. It may sound counterintuitive, but I really loved the moments during our stakeholder meetings when conflicts and disagreements would appear, because that’s when I heard what the community’s real needs and challenges were. Our stakeholder group had excellent synergy, and it was a great experience to see them realize the benefits that benchmarking has outside of just the numbers—the ways it can open up the conversation for other sustainability measures such as recycling, but even more basic questions of where we get our electricity and how we can better protect our community through efficiency and responsible environmental stewardship.

The City Energy Project is a national initiative to create healthier, more prosperous American cities by improving the energy efficiency of buildings. The pioneering actions taken by the 20 participating cities are now distilled in a cured yet comprehensive City Energy Project Resource Library, a must-use tool for any jurisdiction on how to leverage energy efficiency to reach ambitious climate, economic, and social goals. Learn more atcityenergyproject.org. 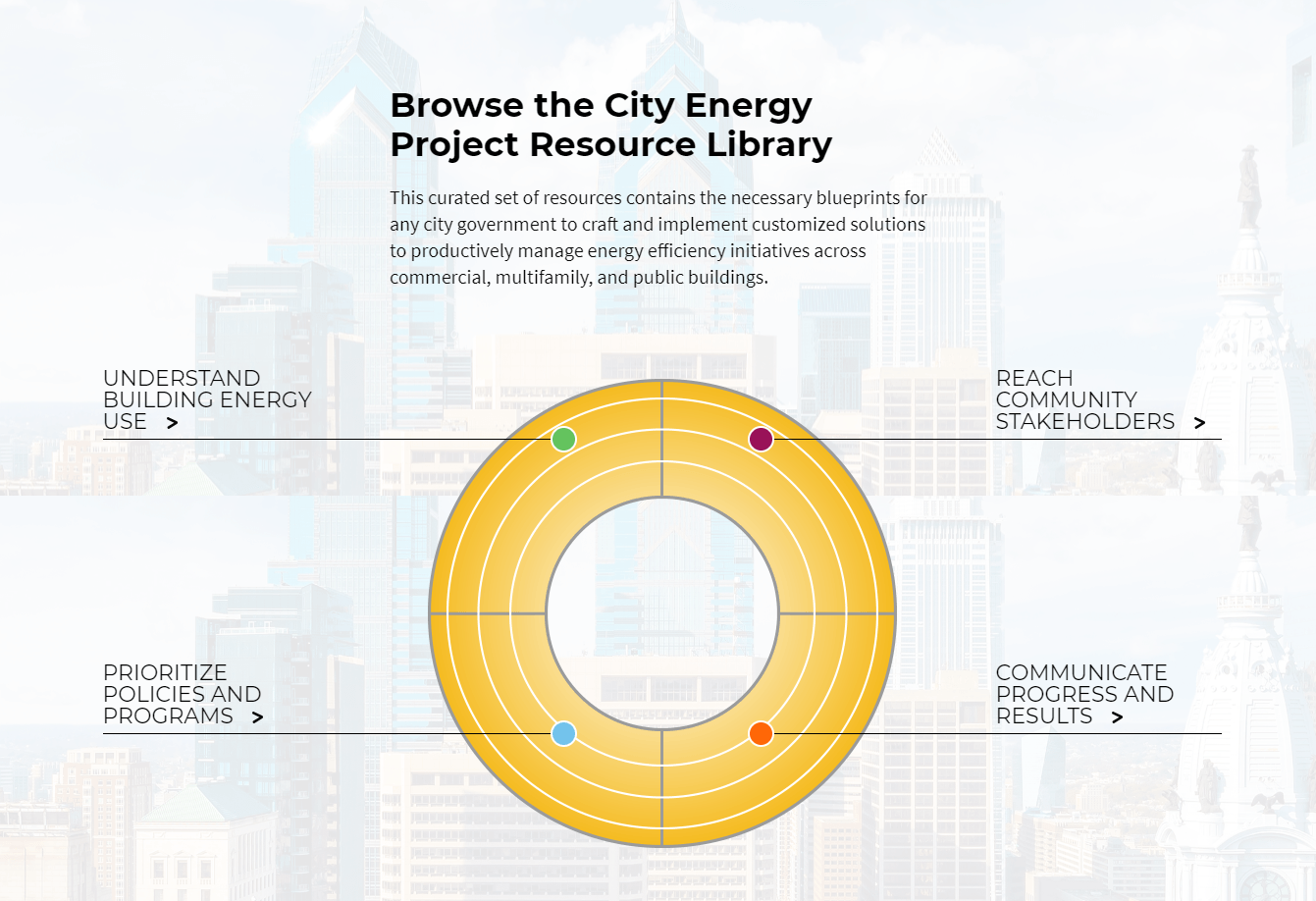 The City Energy Project is a national initiative to create healthier, more prosperous American cities by improving the energy efficiency of buildings.