The Climate Mobilization Act is one of the most ambitious actions any city in the world has taken to reduce carbon emissions. Now, the hard work of implementation begins.

Today, New York City (NYC) Mayor Bill de Blasio is expected to sign the Climate Mobilization Act, a six-bill package that many are saying is the largest legislative mandate to cut climate pollution by any city in the world. Its centerpiece is Int. 1253, which requires large buildings to cut their greenhouse gas emissions by 40 percent by 2030 and 80 percent by 2050. On this Earth Day, that’s something to celebrate.

Buildings account for almost 70 percent of NYC’s carbon pollution. By passing and signing this bill into law, the Mayor, Council Member Costa Constantinides, Council Speaker Corey Johnson, and the Council are demonstrating bold climate leadership. To ensure the vitality of our planet, every city must use energy efficiency and renewable energy in concert to maximize benefits and drive energy use reductions in buildings at a scale and pace as yet unseen in human history.

What does the bill mean for different types of buildings?

Initially, for each building type the buildings with the highest emissions (roughly 20 percent) will need to make improvements to comply. Starting in 2030, intensity limits will fall and about 75 percent of buildings will have to make improvements. Emissions caps will fall again in 2035, 2040 and by 2050. A critical question to be answered going forward will be how much building owners will be allowed to purchase renewable electricity to substitute for efficiency improvements to their buildings.

What buildings are subject to lower-cost requirements?

Certain building types are exempt from the caps, including houses of worship and multifamily buildings with rent-regulated units and other types of affordable housing. Those buildings are required to carry out lower-cost prescribed energy-saving measures, such as insulating pipes and installing thermostats to control radiators. However, those measures typically deliver reductions much smaller than will be required of most buildings subject to the caps.

How will the bill be implemented?

The Mayor and the Department of Buildings are tasked with leading the bill’s implementation and rulemaking over the coming years. This will not be a light lift and will greatly affect the bill’s impact on emissions, jobs, and health. If implementation successfully harnesses energy efficiency, it will lead to renovations to add insulation, upgrade heating and cooling equipment, replace lighting, fix roofs, and countless other improvements. The Mayor’s Office of Sustainability estimates that the bill will create 23,700 new green jobs by 2030.

To ensure that responsibility for the work of New York’s energy transition is shared equitably, the bill gives the Department discretion to accommodate technical and financial constraints faced by specific buildings. This authority should be used to address the legitimate concerns that many building owners have voiced in recent days.

The mayor and the Department won’t be working alone. The bill wisely creates an advisory board with broad stakeholder representation to guide implementation and rulemaking.

Why does this matter outside of New York City?

The bill’s passage makes NYC the second major U.S. city ever to pass a law that mandates energy use improvements across a wide range of existing buildings. (The District of Columbia was first with the Clean Energy DC Act, which went into effect March 22, 2019.) The District and NYC were leaders in passing the first building energy benchmarking laws in the country. Following their leadership, 27 cities now have similar policies on the books and are seeing positive returns. Now, both cities are again leading the charge to ensure buildings are efficient and reducing harmful pollution. Other cities, including the almost 300 U.S. cities and states who have pledged to uphold the targets of the Paris Agreement, will watch closely to learn from these leaders. IMT stands ready to work with cities around the country to build and improve upon the examples of the early leaders. 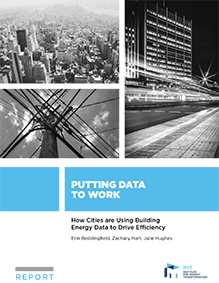 Across the U.S., cities are implementing building performance reporting laws regarding building energy and water use in...